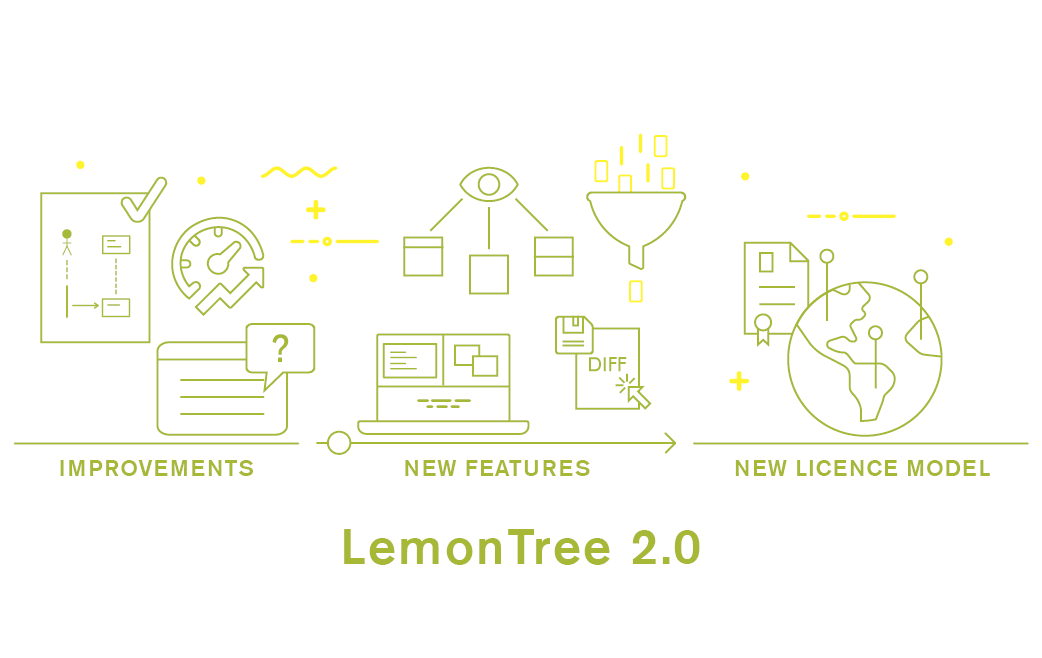 LieberLieber’s LemonTree is a revolutionary development tool used to combine different model versions, especially popular with developers of safety-critical applications. Its Version 2.0 extends both the features and the license model, all based on current practical requirements.

Vienna – As part of the ongoing market rollout, LemonTree’s major release Version 2.0 release implements key practical requirements in a developer-friendly manner. Floating licenses are now also available to facilitate the wider use of the Diff & Merge tool. Dr. Konrad Wieland, responsible for LemonTree at LieberLieber, comments: “As interest in LemonTree continues to grow, we are responding to a frequently-expressed wish by offering floating licenses. The licenses are issued by a central license manager. This makes it possible to include people who only want to work with LemonTree on a case-by-case basis”. This significantly reduces the administrative effort, especially with frequent user changes, as everything runs automatically.

Model comparison can be saved

For all companies that create software in the field of functional safety, a review of every change in the model is mandatory. This is now facilitated by a new function in LemonTree which allows developers to save a session in which two models are compared or merged (diff function). This preserves the selection of models to be compared and can also be used by another person in the context of a review. “Many of our customers have to review every change in the model (Change Request). We make this complex process much easier with this feature,” says Wieland.

The use of filters is also very helpful in order to be able to carry out such a review of edited models in a secure and concentrated manner. The Advanced Filter feature now allows you to use a simple language (e.g. “and/or”) to display only specific changes. This allows you to go through all changes step by step to keep track of them. The filter settings can also be saved so that they can be reused at any time.

Diagrams facilitate communication
In addition to the textual tree view, more and more developers are now using the graphical diagram view when working with models. Previously, however, it was not possible to view a preview of the new model, which had been merged from two source models, as a diagram. “Working with diagrams is becoming more and more popular because the visual representation is often easier and faster to grasp than the tree representation. Therefore, in the new version, we also realized the preview of the target diagram. This allows developers to quickly see how the changes will ultimately affect them,” explains Wieland. In addition, individual diagrams can be displayed on a different screen, for example.

Better understanding of the changes
Further features facilitate a deeper understanding of the changes in the model. In LemonTree 2.0, simple layout changes are clearly distinguishable from real model changes. This is especially important for many changes to get a clear picture of where changes have been made. A new “Property GUI” has also been created for deep model editing, allowing changes to be viewed in detail both in the diagram and in the tree display. Properties can now be edited in the model. In addition, profiles that the company has developed itself, for example, can be integrated into LemonTree with this feature. “Due to the close connection of our development work to practical use, we are sure that with LemonTree 2.0 we provide important and immediately usable functions. In this way, we ensure that our diverse project experience is quickly incorporated into the product and is available to all users. In order to quickly familiarize our customers with the advantages of the new version, we have greatly expanded our help page and described there all features in detail,” concludes Wieland.

The new LemonTree 2.0 release is now available. Arrange a webinar right now to get to know the solution and its area of application better. We help your teams to efficiently compare and merge their models in order to complete projects faster.